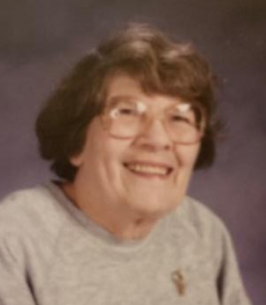 Pearl grew up in Muhlenberg near what is now the Route 61 Diner. She would often tell stories about growing up in a large family during The Great Depression. She lived most of her life in Reading and moved to Willow Brooke in January of 2021.

Pearl previously worked for Bachman’s Pretzels and the Reading School District as a Lunch Aide. She retired from Vanity Fair in Wyomissing but remained friends with her VF coworkers and accompanied them on many bus tours.

Pearl was inducted into the Voters Hall of Fame and received an award for her efforts. She was very proud of being an American and was known for wearing an American flag pin on her hat every day.

During her life, she enjoyed biking, roller skating, and cooking. Her banana bread,chocolate chip cookies, pot pie, and pizzelles will be missed.

A viewing will take place at Henninger’s Funeral Home, 229 North 5th Street, Reading, Pa, on Monday, August 22, 2022 from 6 to 8 p.m. A viewing is also scheduled from 8:30-9:30 a.m. on Tuesday, August 23, 2022 at St. Margaret Roman Catholic Church, Reading, PA. A Mass will immediately follow the viewing. Pearl will be interred at Gethsemane Cemetery, Laureldale, PA with her loving husband Nunzio.