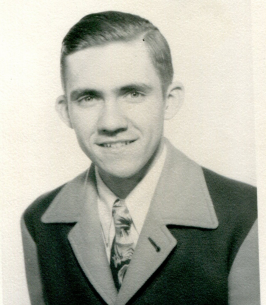 Richard Hoyer Esterly was born in Gibraltar Pennsylvania on Wednesday March 9, 1927, and passed into the loving and gracious hands of God in his apartment at Manor at Market Square on Saturday October 1, 2022 at age 95. He was the only child of the late Glancy Bryan Esterly, piano teacher by trade, and the late Sarah Esterly (nee Hoyer), a full-time home-maker. Richard graduated from Mt. Penn High School in 1945, and enlisted in the U.S. Army, where he proudly served through 1949. He was first stationed in Louisiana, and later assigned to a hospital in Denver Colorado where he served as a Medic.
Upon leaving the Army, Richard took a 30-day cross-country car trip to California with his mother and his aunt Mary Hoyer, in their new Packard, visiting 5 national parks. He then started work at the Mt. Penn Movie Theatre, working for 21 years in concessions, tickets, and the office. It was there that he developed his life-long passion for movies, over the years acquiring an impressive collection of about 1,600 DVD’s and 2,400 VCR tapes of movies and TV shows from the 1930’s through the mid-2010’s.
In 1969, after a 6-week vacation to the West Coast by train with the owners of the movie theatre, Richard started a 15 year career in Accounts Payable with Gilbert Associates (later Gilbert Commonwealth) on Lancaster Avenue in Reading and at the Green Hill headquarters. He then joined Meridian Bank, continuing his career in Accounts Payable for another 6 years. Beginning around 1995, Richard worked part-time for the Glenn Stech CPA firm in Shillington, working in clerical support and retiring in 2017 at age 90. WOW!!!
While Richard’s passions and joys included movies, they also extended to singing and playing the piano. He also had a passion for all things “tomato” including juice, soup, sauces, and most of all KETCHUP on just about anything and everything! The Ranch House, Olive Garden & Red Lobster were his favorite restaurants.
Richard was a faithful and joyful member of St. Mark’s U.C.C. in Reading from 2000 until its closing in July 2021, serving in the choir, directing the choir at weekly rehearsals for several years, and on special Sunday worship occasions playing the baby grand piano with talent and gusto – hymns delivered with a kind of “razzmatazz” style and flair, and enjoyed by everyone!
Richard lived in Shillington many years, and in 2017 moved to Manor at Market Square on Penn Street in Reading. There he continued directing a chorus group, playing piano at Sunday Worship services, and as recently as a few short weeks ago accompanying the Manor’s choral group for a concert for residents and guests.
Richard was a kind, gentle and loving person, always cheerful, and always helpful to those in need. He righted wrongs where he saw them, and had a positive outlook on life. He was a true Christian in every sense of the word -- by thought, word and deed. The world and the many lives he touched are all the better for him being here. Along life’s journey, he made friends easily and cherished those friendships -- especially at St. Mark’s U.C.C. and Manor at Market Square. To name just a few: Bob & Polly Shanaman, Connie Wylezik, Marianne & Kevin Yoder, Eleanor Coleman, Dave Hollenbach, Debbie Miller-Brown, Jill Bailey and Stephanie Ziegler.
A special and heartfelt THANK YOU to the wonderful, loving and caring staff & friends at the Manor at Market Square, the many folks helping him from Caring Hospice, and the prayers, visits and calls from those who touched his life. He will be deeply missed by all who knew him, and never forgotten. Indeed, we are very blessed to have known him.
Services will be at Henninger Funeral Home, 229 N. 5th Street in Reading, on Tuesday October 11, 2022. Viewing from 10:00 AM to 11:00 AM, and service by Rev. Charles Nease to follow at 11:00 AM. Burial will be at St. John’s Cemetery in Gibraltar.